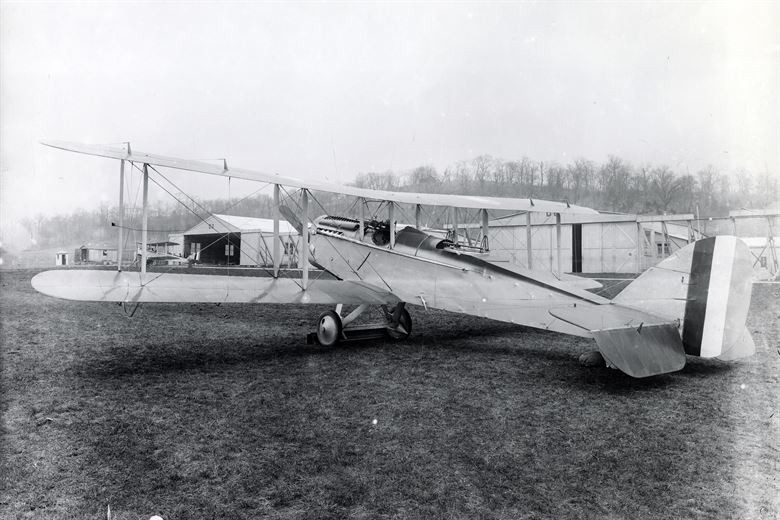 F. E. Warren Air Force Base is unique for a variety of reasons. It is the oldest, continuously-active military installation in the United States Air Force system; it was home to the first operational intercontinental ballistic missile squadron; and it is an air force base without a runway. While there are a variety of reasons why F. E. Warren AFB never acquired fixed-wing aircraft, the institution did establish a “flying field” shortly after World War I. In fact, with the onset of the aviation era, airplanes were en route to Fort D. A. Russell in 1919.

In 1918, a dirt airstrip was established at the east end of Fort Russell. The government’s increased desire to tactically employ aircraft convinced the Army Air Service to develop a flying field at the post. The dirt runway was the only airstrip in southeast Wyoming until 1920, and was thus employed by both military and civilian aircraft. According to Mrs. Paula Taylor at the Warren ICBM & Heritage Museum, “the tricky Wyoming winds and occasional prairie dog hole in the airstrip made the field rather hazardous.” Nevertheless, the Fort Russell flying field brought new and exciting opportunities to the base.

On May 1, 1919, the Victory Loan Flying Circus hosted by the U. S. Army Air Service arrived at Fort Russell. Led by Captain Carl A. Spaatz, noted aces, including Lieutenant Colonel William Thaw of the Lafayette Escadrille and Major Philip F. Fullard of the British Royal Flying Corps, conducted various aerial feats and exhibition dog fights in European and American aircraft, such as the German Fokker, French SPAD, and RAE SE-5. The primary purpose of the flying circus was to promote the sale of Liberty Bonds after the war and to also encourage civilians to join the Army Air Service. The Wyoming State Tribune declared the event a sensation, as it was the first time “a successful airplane flight ha[d] ever been made in Cheyenne.” The success of the flying circus undoubtedly highlighted Fort Russell’s capability to host fixed-wing aircraft.

Only five months later, on September 25, the Fort Russell flying field was selected as a stop for the Army Air Service’s Transcontinental Reliability and Endurance Test. After World War I, the Army Air Service sought to test the limits of its aircrew and equipment by having two teams, on opposite coasts, fly across the nation and back. Flying a variety of different airframes, including: American DH-4s, Fokkers and SPADs, sixty-three pilots departed from either New York or San Francisco and raced across the country under extreme flying conditions.  According to retired Air Force Colonel Gerald M. Adams, each participant was required to land, report, and refuel at Fort Russell before departing for the next location. The Army Air Service informed leadership at Fort Russell that the base’s flying field needed to be in proper order for the participants to land on or about October 8. While the updated runway was completed in time, the long-awaited “birdmen” did not arrive in Cheyenne until the following day. In his book The Post Near Cheyenne, Adams highlights that “although there were no fatal crashes . . . . there were a number of landing accidents caused by the ever-present Wyoming wind.” The test was completed on October 31; however, fifty-four accidents occurred and seven lives were lost in the process.

Naturally, Fort Russell’s Flying Field became an entertaining site for the Cheyenne population. The flying circus and Transcontinental Reliability and Endurance Test allowed the local populace to see the wonders of modern aviation and provided grand entertainment. However, the airstrip was short lived. While the base and city of Cheyenne were preparing to expand the airfield in preparation for the inbound Air Mail Service, the Secretary of War, Newton D. Baker, decided that the post needed to preserve the land for future endeavors, and, thus, in one quick motion, Baker ended the flying field at Fort Russell. By mid-1920, the airstrip was moved north to what is now the Cheyenne Municipal Airport.