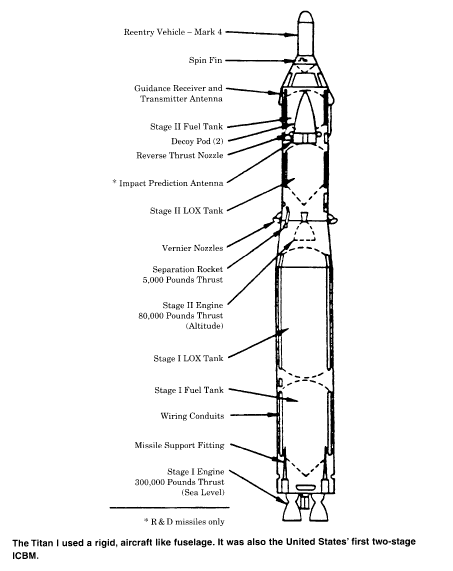 The Titan I (SM-68A) program began in January 1955 and took shape in parallel with the Atlas (SM-65/HGM-25) intercontinental ballistic missile (ICBM). The Air Force’s goal in launching the Titan program was twofold: one, to serve as a backup should Atlas fail; and two, to develop a large, two-stage missile with a longer range and bigger payload that also could serve as a booster for space flights. Like Atlas, Titan I’s liquid cryogenic fuel was a severe drawback

Propulsion:    The Titan ICBMs were two-stage, liquid fuel missiles. The specifications for each stage are given below.

a Aerozine 50 was composed of equal parts unsymmetrical dimethyihydrazine and hydrazine.

b American Bosch Arma was originally selected to build the inertial guidance system for Titan, but in 1957 the Air Force decided to use the Bosch Arma for Atlas and brought in AC Spark Plug to build the Titan system.

Guidance:      Titan I: radio-inertial guidance. The radar was built by Bell Telephone

Laboratories in Allentown, Pennsylvania, and the guidance computer by

Titan was the United States’ first true multistage ICBM. At the conclusion of the first and second stage firings, the engines and fuel tanks for those sections dropped

away, thereby decreasing the weight and mass of the vehicle. That made for a more effi­cient missile, which resulted in increased range and a larger payload.

The most notable difference between the Titan I and Titan II was the type of oxi­dizer and propellant each used. Titan I used liquid oxygen as an oxidizer. It was cryo­genic, meaning it had to be kept at an extremely low temperature, generally around

—195 degrees C. It had to be stored in special refrigerated tanks and pumped aboard the missile before it was fired. Liquid oxygen is extremely volatile, inflammable, and very difficult to handle, especially within the confines of an enclosed missile silo.

In contrast, Titan II used a noncryogenic oxidizer that could be stored aboard the missile. It also used a hypergolic fuel, meaning it spontaneously burst into flame when it came in contact with the oxidizer.

The launch sequence took approximately 15 minutes. After receiving a launch order, the crew filled the missile’s tanks with 200,000 pounds of liquid oxygen and RP-l. After the missile was fueled, it rode to the surface on the silo elevator and then was fired. The flight began with the ignition of the large first-stage engine that burned for 134 seconds and pro­pelled the missile to an altitude of 35 miles. As the first stage expired and fell away, the second stage fired; it burned for another 156 seconds, boosting the missile to an altitude of 150 miles and a velocity of 22,554 feet per second. After the second stage fell silent, two small vernier engines fired for an additional 50 seconds making final course corrections to the trajectory After the vernier engines burned out, the reentry vehicle carrying the war­head followed a ballistic trajectory, and at the apogee of its flight soared to an altitude of 541 miles above the earth’s surface. Time elapsed for a 5,500 mile flight: 33 minutes.

The following month the WDD directed its systems engineering and technical direc­tion (SE/TD) contractor, the Ramo-Wooldridge Corporation, to institute a study of alter­nate ICBM configurations. Shortly thereafter the contractor hired Lockheed Aircraft Corporation and the Glenn L. Martin Aircraft Company to help with the task.

The ICBM Scientific Advisory Committee was a group of prominent civilian scientists and engineers that advised the Air Force on the missile program.

When the study began, both the WDD and Ramo-Wooldridge were leery of becoming overly reliant on Atlas. Convair’s design reflected an unconventional approach, and while many tests had been made, it had not been flight tested nor could it be for nearly 3 years.

Based on the preliminary results of its study, in October the WDD recommended that Convair go ahead with Atlas, but at the same time the development agency also suggested that the Air Force broaden its ICBM program to include a missile with a rigid, aircraft type fuselage and an alternate engine configuration. The WDD stressed that developing a second ICBM would allow the Air Force to pursue a more ambitious design and would also stimulate competition between the two ICBM programs.

In January 1955 the ICBM Scientific Advisory Committee reviewed the WDD’s find­ings and recommended that the Air Force pursue an alternate ICBM configuration, most probably one with a two-stage propulsion system. Based on the committee’s recommen­dation, in April 1955 Secretary of the Air Force Harold Talbott authorized the WDD to begin work on a second ICBM. His only stipulation was that the winning contractor agree to build its missile production facility in the central United States.d

The Air Force solicited bids for the second ICBM in May 1955 and the following October awarded the Glenn L. Martin Aircraft Company of Baltimore, Maryland a con­tract to develop the new Titan I (SM-68A) ICBM. Martin built its Titan production facil­ity outside of Denver, Colorado. The Air Force accepted delivery of its first production Titan in June 1958, and began testing shortly thereafter. In April 1959 the Army Corps of Engineers began supervising the construction of the first Titan I launch facilities at Lowry AFB, Colorado. Three years later that site hosted the first Titan I squadron to be placed on operational alert.

In October 1957, Congress authorized the Air Force to deploy four Titan I squadrons. Later that number increased to 12 squadrons, evenly split between Titan I and Titan II. With their 6,300-mile range, the Air Force based the Titan Is between Colorado and Washington state. The Titan IIs, on the other hand, had a 9,000-mile range and could be based farther south. By locating the Titan II bases in Arizona, Kansas, and Arkansas, the Air Force achieved a wider national dispersal pattern. Other factors that affected the location of the Titan launch facilities were population density under the missile’s pro­jected flight path, and the location of existing bases to provide logistical support. 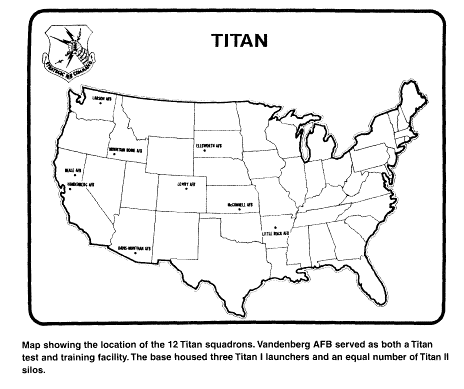 In 1956 the Air Force decided that all of the Titan I missiles should be based in “super-hardened” silos buried deep underground. Using data from above-ground nuclear tests, the Air Force found that at a reasonable cost it could construct the launch facili­ties to withstand overpressures of 25 to 100 pounds per square inch (psi). Subsequently, all of the Titan I launch sites were built to withstand overpressures of 100 psi.

The Army Corps of Engineers Ballistic Missile Construction Office (CEBMCO) began building the first Titan I launch facilities at Lowry AFB, Colorado, in May 1959. Each squadron consisted of nine missiles evenly divided among three launch complexes. The missiles were grouped in clusters of three because they had to remain close to their ground-based radars and guidance computers.

The mammoth underground complexes were miniature cities, complete with their own power and water supplies. The entire complex was buried deep beneath the ground, and all 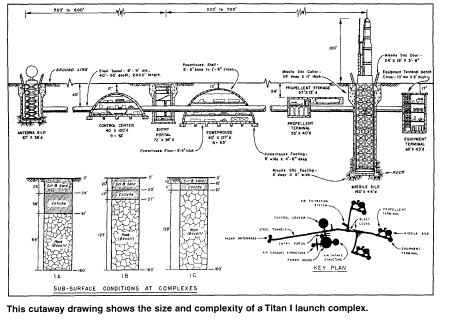 the parts were linked by underground passageways. At one end of the complex were the three missile silos, each 160 feet deep and 44 feet in diameter. They were built of reinforced concrete that ranged in thickness from 2 to 3 feet. Within the silo was a steel framework that housed both the missile and the elevator that carried it to the surface. The only parts of the silo that protruded above the surface were two horizontal doors, each weighing 125 tons.

Adjacent to each silo were the propellant storage and equipment terminal buildings, both of which were buried under 17 to 24 feet of earth. Several hundred feet away were the control room and power house. Both were domed structures built of reinforced con­crete and buried 10 to 17 feet beneath the surface. The control room was 40 feet high, 100 feet in diameter, and housed all of the launch control equipment. The nearby power house was 60 feet high, 127 feet in diameter, and contained generators and the power distribution system. Nestled between the two buildings was the cylindrical entry portal, 72 feet deep and 38 feet in diameter, that controlled access to the underground complex.

At the base of the complex were two radar antennas that were part of the missile’s ground-based guidance system. The antennas were housed in two silos, each 67 feet deep and 38 feet in diameter. The launch crews raised the antennas above ground as they readied the missile for firing. The antennas were approximately 1,300 feet from the farthest silo. More than 2,500 feet of corrugated steel tunnel, 9 feet in diameter and buried 40 feet beneath the surface, connected all the buildings within the complex.

The Titan technical specifications came from Chronology of the Ballistic Missile

Information on the warhead reentry vehicle combinations also came from

For the construction of the Titan I sites see the “Beale Area Historical Summary: